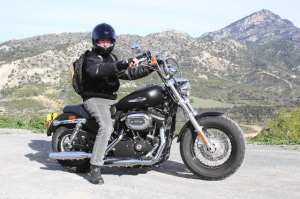 When I undertook the first longer trip with my new motorcycle “Black Betty”, the way led us inter alia to Kormatiki/Korucam, the village of the Maronites. The well-known restaurant on site that insiders only know as “at Maria´s” was crowded with guests.

So my friend Naci and I chose a table where already two men enjoyed their meal. It came quickly to a conversation and it turned out that they were Germans, who know North Cyprus well through countless visits and operate their own website about it.

Of course, I visited the website of Chris and Fred and was amazed at the huge amount of pictures that can be seen on it about Northern Cyprus. A recommendation for any lover of the island.

I asked Chris to tell me something about their preference for Northern Cyprus and have been given this answer:

The “Kuzey-Kibris.de” team met through a mutual friend in late 2001. At that time not yet with Northern Cyprus as a common background.

In 2006 Fred, who had visited the island up to four times a year since the early 1980s, asked me what I had planned for the autumn, because he again wanted to fly to Northern Cyprus, but best not alone.  So I accompanied him and was infected immediately with the “island-virus“. Additionally it had been my first “sun, beach and sea” holiday for years. Accordingly, many pictures were taken at that time.

When I was back home of course I wanted to show my holiday photos to some people. But for different technical reasons I wasn´t able to manage it.

But as I  had previously installed a web gallery for testing purposes and nearly everbody had got Internet access, the idea was born to put the pictures online to be able to share them easily with others.

It was not very long before the next holiday in North Cyprus was made and more photos were taken.

So the first domain had been registered and customized to its present design. After dealing more intensively with the issue of Northern Cyprus and noting that the information about it was either in the form of endless texts or insufficient, I decided in the end to create my own website and to collect most detailed informations in a short form not to overwhelm the potential readers.

Categories on the website like “tips“ (will be soon renamed  “recommendations“) and installed links are based on personal experiences or those of acquaintances or friends and have developed during the time. Additional presence in the net, such as multiple domains or pages on Myspace and Facebook were only consequent steps.

Today we have contacts throughout Northern Cyprus, are always up to date about events taking place and have the largest picture gallery of Northern Cyprus in the World Wide Web besides Facebook.

To visit the website (in German and English language) –

Born in Augsburg, Bavaria, Germany in 1957, I was educated at a Baccalaureate High School. Later completed Technical University with a degree in Economic Informatics. I served for 12 years in the German Army before joining a French computer company for another 10 years. Then ran my own motorcycle and gastronomy businesses before deciding to retire. I arrived in North Cyprus with my second wife in 2004 and since her sad loss in 2011, I have kept myself very busy trying to help others with similar problems and in 2012 became the Secretary of “The Foreign Residents in the TRNC” (TFR). I am very keen to see expat communities coming together and playing their part in helping North Cyprus, our adopted homeland.
View all posts by tfrsecretary →
This entry was posted in Friends Pages, German friends, Information and tagged German, Germany, Girne, Kuzey-Kibris.de, Kyrenia, Lefkoşa, Nicosia, North Cyprus, Northern Cyprus, TRNC, Turkish Cypriot. Bookmark the permalink.

2 Responses to Impressions of Northern Cyprus