The Foreign Residents in the TRNC (TFR)

By Sarah Garsed and Ralph Kratzer 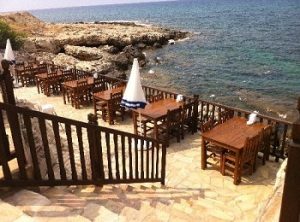 The 19th Annual General Meeting (AGM) of The Foreign Residents in the TRNC (TFR) – an association of expats from 27 different nations, living permanently or temporarily in North Cyprus – was held on Saturday, 29th October 2016, like the years before at the Silver Rocks Restaurant in Lapta, and was attended by more than 120 members.

Heinz Nauroth, Chairman of the association, opened the meeting at 11.35 am and welcomed all TFR-members present.

Sarah Garsed was nominated as being the Meeting Secretary and Robin Melhuish as the Meeting Chairman for the day.

First of all the Chairman welcomed the members present and asked for a minute of silence for the deceased members of the TFR in the past year.

After that the quorum of the assembly was determined by the Meeting Chairman.

As this AGM had to elect a new Committee for the next period of office the Meeting Chairman explained the method of voting in the beginning.

At the request of Tommy Rognmo, Committee member of the club, the first resolution for this meeting was accepted, namely not to allow proxy votes for this upcoming election, because it was not written in the constitution. The majority of the AGM-participants followed this resolution by showing of hands. 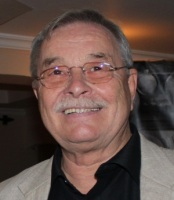 In his Chairman´s report Heinz Nauroth explained the improvement within the association since he took over responsibility more than 10 years ago. He then thanked the Board members for their work and declared his resignation for health reasons.

The Meeting Chairman thanked Mr. Nauroth and suggested that he become a lifetime Honorable Chairman of the TFR, which was agreed by the AGM unanimously.

The Chairman´s report was followed by the reports of the Deputy Chairman Willy Lindh and the Secretary Ralph Kratzer. The Treasurer Horst Gutowski informed the audience in short about the financial status of the association. Further reports followed by the Committee members Tommy Rognmo about the last year´s work of the Cemetery Subcommittee, Pamela Tschersich and Richard Bradley about social club life and events of last year. Carolyn Patterson, head of the Advisory Health Team, also reported about her work in the past period…..

The auditors´report, delivered by Lynn Hartill and Petra Wendt, was read out by the Meeting Chairman: Both auditors had checked the book-keeping of the Treasurer and had found no problems.

The proposal of an AGM-participant that the future reports of the Board members should be published to the members of TFR in written form before the AGM was agreed by the participants of the meeting.

A resolution of the member Seppo Leino, which reached the Committee before the AGM, was read out by the Meeting Chairman. The suggestion that the period of office of the TFR-Committee should be reduced to one year instead of two years was rejected unanimously.

The second point in this resolution which demanded a more detailed definition in terms of the 2 posts in the Board called „members for special tasks“ was declared as already sorted.

The election of the new Committee followed. Before that the new candidates showed their faces to the audience, as there were Seppo Leino, Toon Hansen and Richard Bradley for the Deputy Chairman position and Jan Gustafsson for the post of the Events Manager. Another candidate for Deputy Chairman, Merlyn Abreo, unfortunately couldn´t attend the meeting for personal reasons.

Due to an application of a member which reached the Committee before the AGM, that the voting should be done as a secret ballot, voting papers were distributed to the attending members, filled out and handed back to the Meeting Chairman.

After counting all votes, the result was read out by Mr. Melhuish as follows:

Out of 123 ballot papers there were 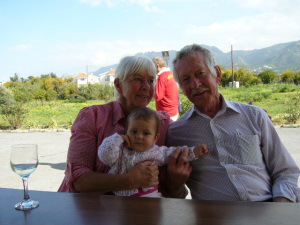 Willy Lindh – new Chairman with wife Lena and grandchild in 2013

120 votes for Willy Lindh as Chairman
122 votes for Ralph Kratzer as Secretary
122 votes for Horst Gutowski as Treasurer
77 votes for Pamela Tschersich as Events Manager
116 votes for Carolyn Patterson as Social Tasks and Health Advice Manager
95 votes for Tommy Rognmo as Leader of the Cemetery Subcommittee.

As none of the 4 candidates for Deputy Chairman could get a simple majority, a second ballot was necessary to decide between the 2 first ranked candidates. The result was that a majority of the members present voted for Toon Hansen as the new Deputy Chairman.

The members voted at the end of the AGM unanimously for James Patterson and Henri Veekman becoming the new auditors for the following period of office.

After the official end of the meeting most of the participants stayed for lunch and a relaxed chat in the Silver Rocks restaurant.

Born in Augsburg, Bavaria, Germany in 1957, I was educated at a Baccalaureate High School. Later completed Technical University with a degree in Economic Informatics. I served for 12 years in the German Army before joining a French computer company for another 10 years. Then ran my own motorcycle and gastronomy businesses before deciding to retire. I arrived in North Cyprus with my second wife in 2004 and since her sad loss in 2011, I have kept myself very busy trying to help others with similar problems and in 2012 became the Secretary of “The Foreign Residents in the TRNC” (TFR). I am very keen to see expat communities coming together and playing their part in helping North Cyprus, our adopted homeland.
View all posts by tfrsecretary →
This entry was posted in British friends, Dutch friends, Friends Pages, German friends, Information, Irish friends, Scandinavian friends, TFR Events and tagged AGM, Annual general meeting, Charities and Associations, Heinz Nauroth, Lapta, North Cyprus, Northern Cyprus, The Foreign Residents in the TRNC, TRNC, Willy Lindh. Bookmark the permalink.